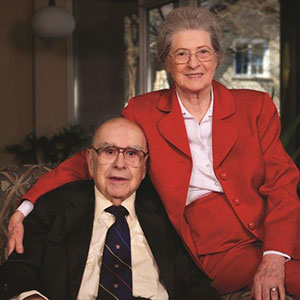 Dr. Bader was recognized internationally as a generous philanthropist and was especially devoted to education. Along with Bader Philanthropies, she supported Victoria University in the University of Toronto and Queen’s University, always taking a keen interest in providing students with the best resources for learning.

A reflection of her time as a student at Victoria College inspired Bader to support access to education at her alma mater by funding extensive student scholarships and bursaries, including $400,000 to the Opportunity Awards which are offered to students from under-represented or at-risk groups. A $6 million landmark gift in 1998 resulted in the Isabel Bader Theatre, a state-of-the-art purpose-built facility that serves as a lecture space and hosts concerts, film festivals, plays and other performing arts events, which was also a passion of the Baders.

Other student-centered initiatives supported by the Baders include $1 million to support Vic’s innovative, undergraduate research program, Scholars-in-Residence and supporting students who wish to study at Herstmonceux Castle, a remarkable building in England they gifted to Queen’s. “Isabel was such a good friend to Victoria College and she had a positive effect on the lives of many students,” notes Victoria College Principal Angela Esterhammer Vic 8T3. “She championed a vision of liberal education and helped us provide student opportunities that deepened their understanding and imagination of the role they play in a healthy society.”

Bader received an honorary doctor of sacred letters from Victoria University in 1995 in recognition of her generosity and many contributions. Victoria University published a collection of love letters between Isabel and Alfred titled A Canadian in Love, which was a special limited edition of 1,000 volumes.