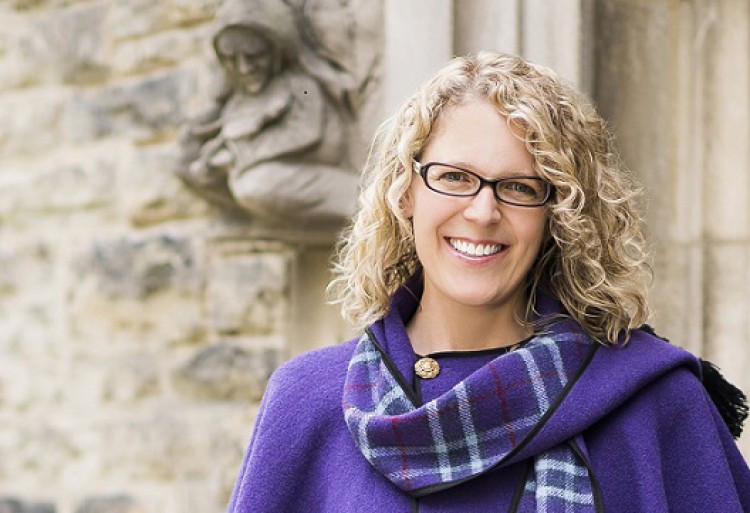 Professor of Theology and Past Principal

An expert in comparative theology, with a particular focus on Christian and Hindu contexts, Michelle Voss Roberts has written widely about aesthetics, gender and embodiment. Her teaching integrates the study of Christian theological traditions with theories of gender and sexuality, disability studies, and religious pluralism.

Among her numerous scholarly publications are several ground-breaking books: Dualities: A Theology of Difference (2010), Tastes of the Divine: Hindu and Christian Theologies of Emotion (2014), and, most recently, Body Parts: A Theological Anthropology (2017). She has also edited of a volume of essays for the introductory theology classroom, Comparing Faithfully: Insights for Christian Systematic Theology (2016). She is the recipient of grants and prizes from institutions including the American Academy of Religion, the National Endowment for the Humanities, and the Society for Hindu-Christian Studies.

Voss Roberts began her career at Rhodes College, where she was an assistant professor of religious studies from 2006 to 2011. From 2011 to 2018, she taught theology at Wake Forest University School of Divinity. She served as Associate Dean for Academic Affairs, the School’s chief academic officer, from 2015 to 2018. In this role, she contributed to changes in the curriculum to highlight issues of race and class, gender and sexuality, and religious pluralism. In 2017-2018, she culminated eight years of service with the Society for Hindu-Christian Studies as its president.

Voss Roberts was the 13th principal of Emmanuel College (2018-21) and the first woman to lead the institution as Principal in its 90-year history. She is also an ordained minister of the United Church of Christ, a denomination in full communion with the United Church of Canada. She led the school through a consolidation of its multireligious programs, a period of significant faculty renewal, and the first 18 months of the COVID-19 pandemic.

Voss Roberts, her spouse, Brian Roberts, and their daughter love classical music, hiking, and their golden retriever. They live in the East Danforth neighbourhood in Toronto.

Tastes of the Divine: Hindu and Christian Theologies of Emotion (Fordham University Press, 2014). Awarded the American Academy of Religion Award for Excellence in Constructive/Reflective Studies (2015).

“More than Meets the Eye: The Cross as Maṇḍala.” In Atonement in Comparative Theology: The Cross in Dialogue with Other Religions, ed. Catherine Cornille, 130-148. New York: Fordham University Press, 2021.

“'We Have Been Practicing for This': Interfaith Engagement Reshaping Theological Education. In Deep Understanding for Divisive Times: Essays Marking a Decade of the Journal of Interreligious Studies, ed. Mary Elizabeth Moore, Axel Marc Oaks Takacs, and Or N. Rose, 103-108. Orleans, MA: Paraclete Press, 2020.

“Practicing the Image of God: Why Ritual Can Retrain the Elephant,” Journal of Interreligious Studies (2020): 6-18.

“‘Let the Sacred Be Redefined by the People’: An Aesthetics of Liberation Across Religious Lines.” With Demi “Day” McCoy. In The Arts and Witness in Multifaith Contexts, ed. Roberta R. King and William A. Dyrness. Downers Grove, IL: InterVarsity Press, 2019.

Ordained Minister of the United Church of Christ

Society for Hindu-Christian Studies, Past President