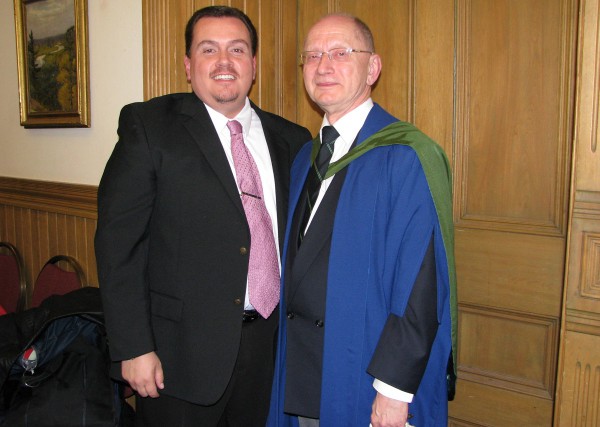 The story of how the Terry Head Scholarship in Sacred Music came into being is both a testament to the strength of the Emmanuel community and to the power of music.

As a young boy growing up in rural Ontario, Emmanuel’s Associate Professor Emeritus of Church Music, Dr. Fred Graham, lived in the same village as Terry Head’s mother. Sharon Head and Fred’s sister took piano lessons from Mrs. Staples in Orono, and Fred’s father delivered coal to Sharon’s family home during the cold winters. Sharon says “Fred was so musically gifted; he became very involved with the United Church of Canada and that is how our son Terry and Fred connected.”

It was his friendship with and knowledge of Fred’s work that eventually led Terry to Emmanuel College where in 2012 he completed his Masters of Sacred Music degree, following his undergraduate degree in musical performance at Western University. Fittingly, Fred Graham was one of Terry’s professors during his time at Emmanuel.

Terry was blessed with a special musical gift from an early age, and began playing the piano at the age of six. He continued to develop his musical talents over many years, culminating in his graduation from the Glenn Gould School of the Royal Conservatory of Music, and from Emmanuel College.

In addition to his roles as a director of music, Terry was also an executive member of the London Centre for the Royal Canadian College of Organists, a Music United convenor for the Antler River Watershed Region, and vice-president and chair of the program committee for the Ontario Guild of English Handbell Ringers.

Terry’s parents, Sharon and Barry Head, have recently established The Terry Head Scholarship in Sacred Music, a new award at Emmanuel College in memory of their beloved son. Encouraging Emmanuel students in the study of sacred music, the scholarship also celebrates the power of music to heal and to bring community together.

Sharon says, “We are so very pleased to have been able to establish this scholarship for future students who will make a career in music, or keep it alive in their personal lives—or both—like our Terry.”