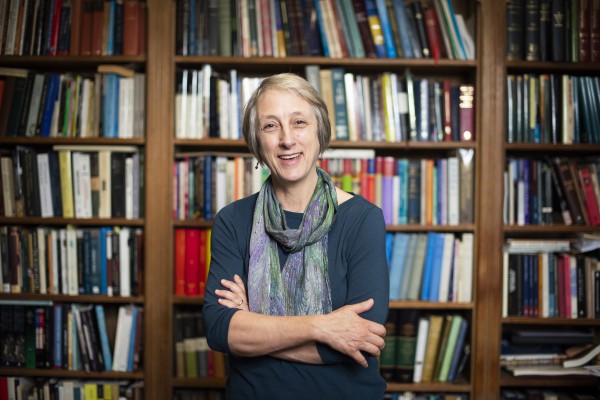 I am Professor of Old Testament/Hebrew Bible at Emmanuel College and hold a joint appointment with the Department for the Study of Religion in the area of early Judaism and a cross-appointment to the Department of Near and Middle Eastern Civilizations at the University of Toronto. I am also a faculty member of the Anne Tanenbaum Centre for Jewish Studies within the university. Before joining the faculty in 2005, I taught at the General Theological Seminary (Episcopal) in New York City. I am an ecumenically minded lifelong Episcopalian with a special fondness for the United Church of Canada.

I became interested in the Bible and its interpretation after spending a year after college in Israel-Palestine at Nes Ammim, a Christian moshav shitufi (similar to a kibbutz) founded to improve Jewish-Christian relations in the wake of the Holocaust. While there, I lived with a couple who were emigrant American Christian evangelical millennialists waiting for the Second Coming. I had no idea how they could interpret the Bible so differently from the way I did. This encounter with dispensationalists made me realize that although I had majored in Religion, I had much more to learn about Judaism and Christianity. After two years working at the Brookings Institution in Washington, DC, I returned to school. I have been happily learning, teaching, writing, and learning some more ever since. I enjoy teaching a diverse range of students at all levels: curious undergraduates without religious commitment, Masters students preparing for Christian or other ministries, and doctoral students who plan to focus on research and teaching. When not teaching, writing, or editing, I love to garden, knit, follow politics, and explore new cities.

I specialize in the Hebrew Bible and its interpretation as well as Jewish literature and cultures of the Second Temple period including the Samaritans, the Dead Sea Scrolls, and early Christianity.  I am interested in the development of scripture and its earliest interpretation, method in the study of the Bible, and the complex relationship between Judaism and Christianity in antiquity and today. I have always been interested in exploring the margins: especially marginal texts that have been ignored, neglected, or misunderstood. Central to my teaching is bringing students to an awareness of the diverse ways in which scripture has and can be interpreted. Central to my research is understanding the innovative role of textual tradition, cultural memory, and embodiment in reframing our presents and futures. Emerging projects include a book tracing the promise of blessing to the ancestors from Genesis through Greco-Roman era literature; and a reconsideration of “apocalyptic eschatology” in early Judaism and formative Christianity (on which, see paragraph above!)  I welcome inquiries from prospective doctoral students with corresponding interests.

I have received grants in support of my research from the Social Sciences and Humanities Research Council of Canada, the Luce Foundation/Association for Theological Schools, Harvard University (Starr Fellow, Center for Jewish Studies), and the Netherlands Institute for Advanced Study.

The political and cultural consequences of scriptural interpretation

The Routledge Introduction to Judaism Volume I: The Babylonian, Persian, and Greco-Roman Eras: From Judean Defeat to Scribal Triumph (London/NY: Routledge) Under contract.

Before the Bible: the Liturgical Body and the Formation of Scripture in Early Judaism (New York: Oxford University Press, 2018)

Editing the Bible: Assessing the Task Past and Present  with John S. Kloppenborg (Resources for Biblical Studies 69; Atlanta, GA/Leiden: SBL/Brill: 2012).

Praying by the Book: the Scripturalization of Prayer in Second Temple Judaism (SBL Early Judaism and Its Literature 14; Atlanta, GA: Scholars, 1999)

“Scribal Bodies as Liturgical Bodies: The Formation of Scriptures in Early Judaism,” in Is There a Text in this Cave? Studies in the Textuality of the Dead Sea Scrolls in Honour of George J. Brooke (Ariel Feldman, Maria Cioatā, and Charlotte Hempel, ed.; STDJ 119; Leiden: Brill, 2017), 83-104.

“Hybridity, Hydrology, and Habitus: Sirach 24 and the Diachronic Formation of Judean Cultures,” in Jewish Cultural Encounters in the Ancient Mediterranean and Near Eastern World (Mladen Popovic, ed.; JSJSup Leiden: Brill, 2017), 157-176.

“Tracing the Use of the Bible in Colonial Land Claims in the Americas” in The Bible in Political Debate: What Does It Really Say? (Frances Flannery and Rodney Werline, ed.; London: Bloomsbury, 2016), 127-140.

I am the editor of the Deuterocanonical volumes for the commentary series, Illuminations (Eerdmans) and am writing the commentary on the book of Judith for that series. I serve on the editorial boards of the Journal for the Study of Judaism, Toronto Journal of Theology, and the JSJ Supplement monograph series.